View source
watch 01:36
We're Getting Mutants in the MCU - The Loop
Do you like this video?
Play Sound

Citron is a plant from Plants vs. Zombies 2: It's About Time. He is encountered in Far Future, while also being a character class in Plants VS. Zombies: Garden Warfare 2.

A orange with strange lip thing, Has eyebrows and blue eyes.

Citron shoots powerful plasma balls. He is a good secondary plant in endless zones with Winter Melon or other plants. It isn't suggested to use it as your only attacking plant as it will have to charge it's attacks.

Upon the usage of Plant Food, it gets struck by lightning and shoots a giant plasma ball that kills all the zombies in that row or kills the leftmost Robo-Cone Zombie, Gargantuar, Mecha-Football Zombie, Shield Zombie or Disco-tron 3000 in one shot. It can also bounce away zombies if they have less health than the plasma's damage. It deals 200 normal damage shots in total. It can also destroy a whole row of graves only if there are no Gargantuars or machines before the graves. Gargantuars or machines will prevent the graves behind them from being destroyed.

As the owner and primary user of "Vitamin C-U-Later" 20-hour energy shots, Citron is always on and always ready for action. "Let's make this happen!!"

Citron is a very serious, nervous and well, panicy type plant. He often freaks out if something awful is happening but hes always ready for his job. Citron doesn't like Jalapeno due to the fact that he once gave him Spicy jalapenos which he told him were "Candy" flavored.

Citron has many friends such as his wife, CitronWater and other citron's. Hes also very close to his brother CitronFire. Some enemies of his consist of Boot-legs, and Jalapeno. Citron will often invite some of his family and other friends to see his store "Vitamin C-U-Later". 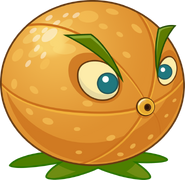 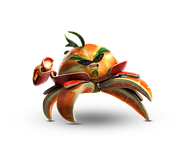 Citron as seen in PVZGW2 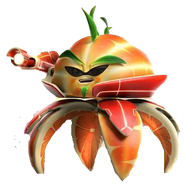 Citron as seen in the Character Selection list while in Backyard Battleground.
Community content is available under CC-BY-SA unless otherwise noted.
Advertisement